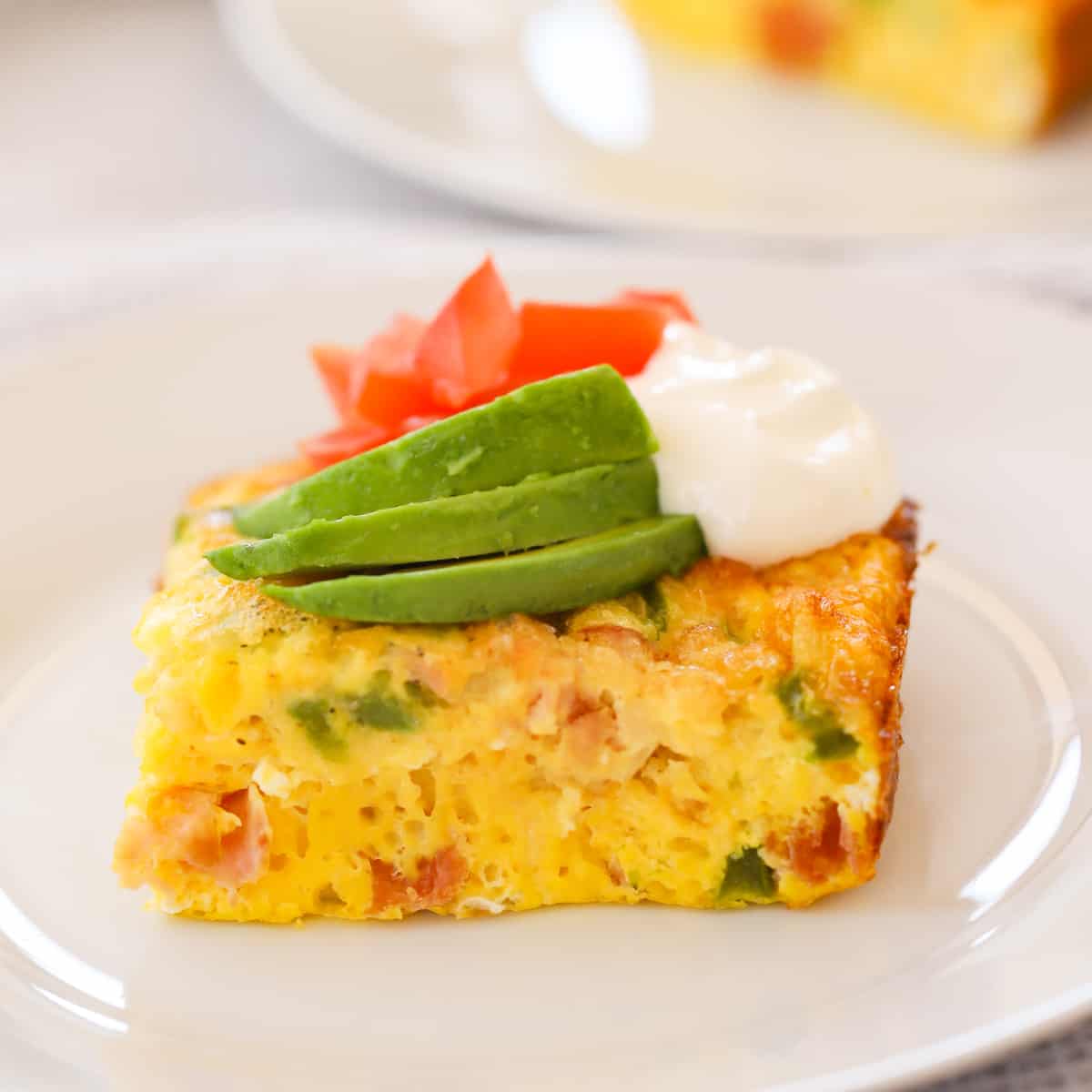 This Baked Denver Omelet is perfect for busy mornings!  It's hearty, delicious, and can be ready on the table in no time.  Just like the traditional Denver omelet, it’s chock full of ham, green peppers, onions, and cheese, only baked casserole style making it a simple no-fuss breakfast for any occasion.

Whether you are making breakfast for a large group or a small family, this is the absolute best egg casserole, or “egg bake.”  It’s made with all of the same ingredients that you would find in an omelet - eggs, milk, cheese, filling and seasoning - only it’s baked in a baking dish.  No need to spend the morning flipping individual omelets over a hot stove!

Once you’ve tried this recipe, feel free to swap out or add additional fillings, cheese and seasoning and see what you can come up with.  Serve your Baked Denver Omelet with hash browns, a green salad or fresh fruit, then sit back and enjoy.

If you love baked egg dishes, be sure to try my Ham and Cheese Quiche, this Spinach and Feta Quiche, or this amazing Sausage Egg Casserole.

Why is it Called a Denver Omelet?

There is a lot of speculation here and really just best guesses.  Some people think that the Denver omelet (or the “Western Omelet”) came from a sandwich called the Denver Sandwich which was filled with the same ingredients - green bell peppers, ham, onions and cheese.

Other historians believe it originated from a dish made by Chinese immigrants who were working on the railroads out West.  The thought is that a version of egg foo young was possibly eaten between two slices of bread so that it could be taken on the go.

How to Make a Baked Denver Omelet

Can You Make a Baked Denver Omelet Ahead of Time?

Yup - there are even multiple ways to do this!  If you want to do some of the prep beforehand and still want to serve it freshly baked, you can cook the peppers and onions ahead of time and store in an airtight container.  The next day, remove from the fridge and prep the rest of the recipe as directed.

As with any type of egg casserole, this Baked Denver Omelet is simple to customize.  Here are a few ideas for simple ingredient substitutions, toppings and more:

Here are some more baked egg breakfast recipes that we love!

What is a Denver omelet?

It is believed this breakfast classic was created by cooks from the American West or the Chinese railroad. It was originally served on bread as a sandwich but at some point, a breadless version was developed and it became known as the Denver or Western Omelet.

What’s in a Denver omelet?

Denver omelet and Wester omelet are interchangeable. Most restaurants have their own spin on the classic but are generally made up of the same main ingredients, eggs, ham, onions, and green peppers.

Should I use milk or eggs in omelets?

It’s best to use water in omelets instead of milk. Milk makes your omelet watery since it will not blend with the eggs. Water blends and helps to keep the omelet high.

No need to spend the morning flipping individual omelets over a hot stove with this Baked Denver Omelet.  It's hearty, delicious, filled with ham, green peppers, onions, and cheese, and can be ready on the table in no time.